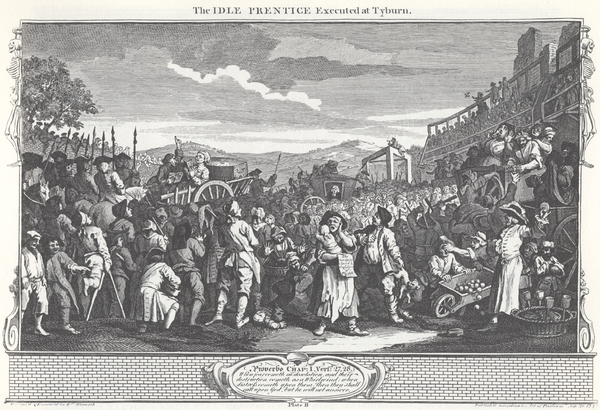 Not all the people who have lived in Pembridge have led exemplary lives, and sometimes it is easier to find out more about those that broke the law in some way. One man who spent part of his life in Pembridge, before becoming a sailor, John Jones was executed at Tyburn on Wednesday 26th of June, 1717 for stealing and for assault. The details of his trial can be found in the Old Bailey Records.

The following, taken from the the account of the Ordinary of Newgate, who was the chaplain of Newgate prison and provided spiritual care to prisoners who were condemned to death shows that John Jones had been apprenticed to a leather maker in Pembridge for about two years. The Ordinary of Newgate had the right to publish accounts of the lives of those executed, which is where the following extract comes from.

John Jones, condemn’d for two Facts, viz. first, for Breaking the House of Sir  Arthur Key, and stealing thence 11 Silver-Salvers value 50 l. 3 Silver-Castors value 8 l. 3 Tankards value 16 l. and other Plate, on the 21st of April last: And secondly, for assaulting Mr. James Lowe on the King’s Highway, and taking from him a Perriwig, value 15 s. on the 21st of May last.

He said, he was about 24 Years of age, born in the Parish of St. Clement Danes: That when young he was carried down to Pembridge in Herefordshire, where most of his Friends and Relations liv’d, and there was bound Apprentice to one of them, a Leather-dresser : That after he had serv’d with him about Two Years he left him, and came up to London: That some time after this, he got into Service with a Captain of a Man of War, and then became a Sailor, and in that capacity serv’d the Crown about Five Years, on board two Men of War, viz. the Guernsey and Triumph, alternately.

He would not plainly own his Guilt of the Facts he was condemn’d for, but only said, that he knew something, and might (if he would) have prevented the commission of them. When I charg’d him with being an old Offender, he confess’d he had been so; and, that he had suffer’d the Law for it, being once burnt in the Hand for a Felony, and at another time whipt.