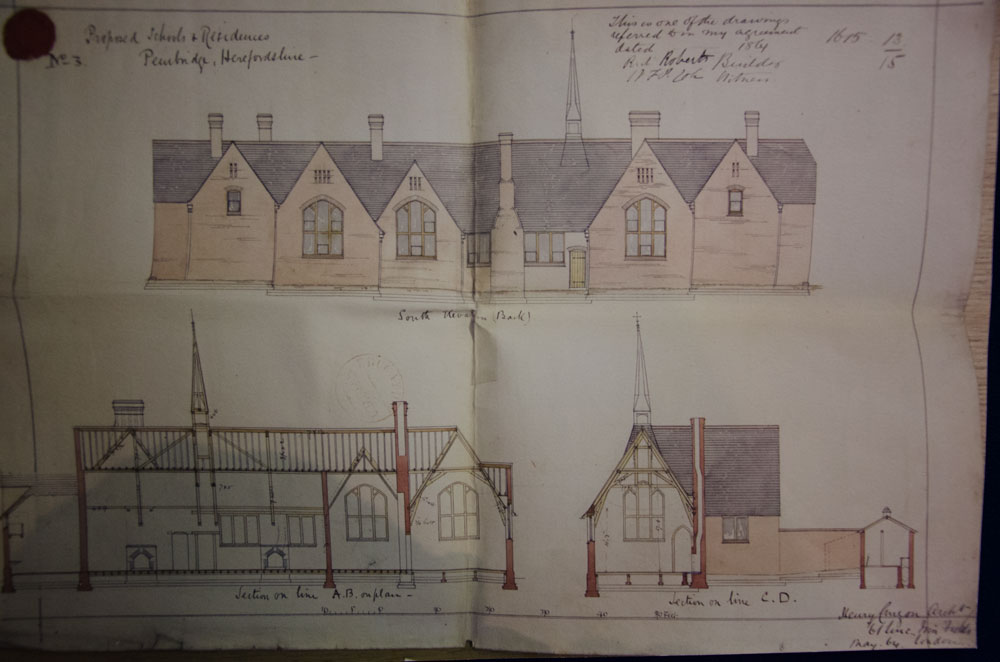 January 2016 marks the 150th year of Pembridge Primary school. The free school which had been in the village since the 17th century had probably grown too small for the village needs and a new, more modern building was needed.

In 1865 a new site was given for the school by Rev Francis Evans and new school houses were built.

They were opened on 29th January 1866 with separate school for boys and girls. Each had their own head teacher and when they opened there was 53 girls and 50 boys in attendance.

In January 1878 the two schools were merged, and the headmaster of the boys school became head of both. In the twelve years it ran as a separate school the girls school had only one head, Miss Alice Tudor. It was her departure which triggered the combining of the schools. A report from an inspection at the time shows that she was effective in her work.

Miss Tudor has taken very great pains with her children, and deserves much praise for what she has achieved during the comparatively short time she has been in charge.

Committee of Council on Education 29th of April 1867

The school log books give an insight into some of the events of the school, particularly with regard to matters of attendance. Attendance at the girls school was generally better than that of the boys who were frequently kept at home to assist with work on farm as demonstrated by logbook comments such has:

“I see a few of the old faces in school this morning – viz. some of the boys who have been kept at home throughout the summer to work.” (26th Nov 1866)

In a district like Pembridge, many agricultural workers had a plot of some quarter-acre land provided with a tied cottages which would provide much of the family’s food. The children were frequently required to work on this land at various times the year. In addition, a small wages available for children’s casual labour also provided an essential supplement to family income. Such work included hop, apple and acorn harvesting, singling and pulling turnips; corn harvesting, binding and thrashing; carrying bark for use in tanning leather; picking stones; assisting with cider-making and crows scaring. This latter job, in the 1860s, boys were paid three shillings a week.

Other recorded instances for absence included poultry dressing, chilblains, playing marbles, helping with the washing, picking primroses and violets which Pembridge children were able to sell to a local dealer twopence per dozen small bunches.