The name of the village Pembridge, comes from the old British ‘Penn’, meaning headland or enclosures and the old English ‘brycg’; bridge or causeway and there has been a thriving community here for over a thousand years. Pembridge is first mentioned in the Domesday book, where it is stated that Earl Harald held it. The manor of Pembridge then moved into the hands of the de Pennebrugge family. The tomb of Sir Richard de Pembridge who fought at the battle of Poitiers in 1356 is in Hereford Cathedral. 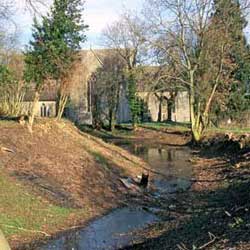 Behind the church, there is a moat and mound where Pembridge Castle once stood, nothing remains of the buildings, the former owners having moved to Pembridge Castle, near Welsh Newton in South Herefordshire. A recent archeological dig on this site found remnants of the foundations and stone walls. They also found a Roman Tegula or roof tile on this site. Five more of these red tiles can be seen in the exterior of the east wall of the Church, showing that even then locals were into recycling!

Pembridge reached its peak of population during the middle ages. Most of the black and white houses in the village date from the 15th century. Originally they would not have been painted in these colours and some of the new timber frame houses, built in the traditional style, show the warm colours of the wood, giving an idea of what they once may have looked like. But it is the old cottages, in their black and white livery, that stand out from these later additions, their crooked beams, cracked and weathered by time, to make Pembridge a perfect postcard village. 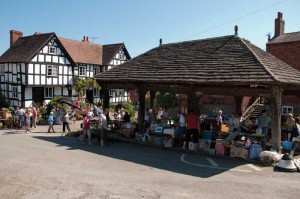 In it’s heyday Pembridge was a busy market town, with a population over two thousand people. It was first granted a charter for a market and two fairs in 1239, and there has been markets held here ever since. The early 16th Century Market Hall still stands in the centre of the village, eight oak beams supporting a tiled roof. One of the wooden posts sits on the original mediaeval stone market cross base and when the building was restored in 2005 a coin dating back to 1806 was found under it, a marker from an early restoration. As part of the restoration it was replaced along with a modern pound coin, to show the dates of the restorations for later generations – and the effects of inflation!

The majority of the black and white houses in the village date from the 15th and 16th century, when Pembridge was at it most prosperous. Dendro-choronlogy or tree ring dating of number of houses in the village showed that there was a major period of house building taking place between 1425 and 1525. Pembridge’s proximity to the Welsh border meant that the English wool merchants came to meet with Welshmen to trade in safety and the village flourished as a trading centre, but with the Acts of Union with Wales during the reign of Henry VIII and increased tranquility in the area meant gradual decline for Pembridge. No longer required as a trading as a centre, the houses have lasted but the prosperity did not and in the 17th century two sets of Alms Houses were built for the relief of the poor. These days they provide modernised accommodation for the senior citizens of the parish. Duppa’s Almshouses, at the top of Bridge street were founded in 1661 by Bishop Duppa of Winchester and the Trafford Almshouse at the East end of the village were built for six poor aged women of the Parish by Alice Trafford, whose father and husband were both rectors in Pembridge and are both commemorated on the chancel walls of the church.