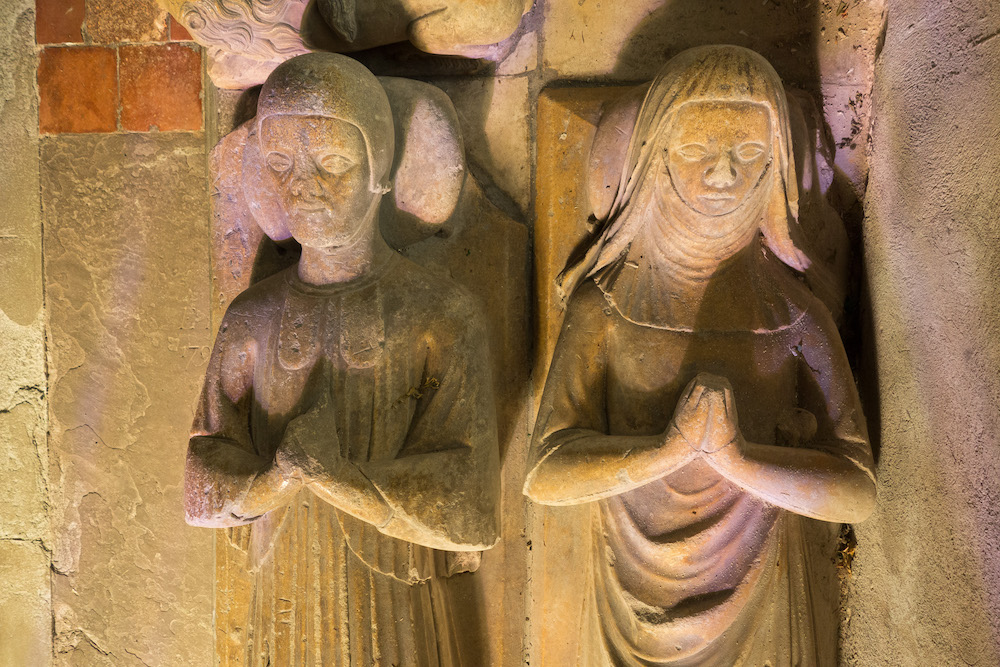 When walking around churches you many have noticed that most tombs are of knights in armour or members of the clergy –  to find one of an civilian is more unexpected, but that it what we have here in the chancel of Pembridge church. That they were an important family is clear – the very fact that they had tombs shows their status and wealth.  The freestone effigies are believed to date from 1360-80. The two men shown are known to be father and son – Nicholas and John Gour, with the two women assumed to be their wives. Nicholas and his wife can be seen in the photo above. He was a Serjeant-at-law, but what was the role of a Serjeant-at-law?

For six centuries starting in the 1300s, the serjeants at law ranked above all other lawyers in England. This was the highest legal office of the day and the Serjeant would have pleaded cases in front of the King.  Throughout those six centuries only twelve hundred men were ever promoted to the dignity of serjeant, the last dying in 1921.  Their role probably started with the thirteenth-century legal practitioners known as countors, a term from the French meaning storytellers. Countors helped formulate the plaintiff’s counts, or causes of action, and the preparatory work called counting. In the fourteenth century their role evolved and became a profession which developed into serjeants at law.

The Serjeants had for many centuries exclusive jurisdiction over the Court of Common Pleas, being the only lawyers allowed to argue a case there. At the same time they had rights of audience in the other central common law courts (the Court of King’s Bench and Exchequer of Pleas) and precedence over all other lawyers. They were also known as the Order of the Coif, after the white silk hat they wore; the Serjeants were the only people allowed to keep their hat on in the presence of the King. The coif can still be seen on Nicolas’s tomb.

To create a Serjeant the king would issue a writ commanding the person to prepare themselves to take the degree of Serjeant. An early form of this is below, translated from the original French, collected by Thomas Hoccleve, a poet. It dates from between 1371 – 1424.

The king etc. to our good friend, A. de B., apprentice of the law, greeting! Forasmuch as we have ordered, by the advice of our consul, that you amongst others should give gold and at (such a time) next coming should before our justices of the Common Bench take the estate of serjeant, in order to plead before our said justices in the said Bench and in all our other courts whatsoever for all who wish to plead therein: We firmly charge and command you to prepare yourself and make ready to give the gold and take the estate of serjeant, as above, at the aforesaid time. And this in no wise omit, upon the faith and allegiance that you owe to us and upon pain of 100s, which we shall cause to be levied to our use from you lands and goods if you should do contrary to this our command. Given etc.

There are a couple of things to note about the writ – firstly there was a strong motivation for the estate of serjeant at law to be taken up, otherwise they would be fined 100 shillings  – this, and the language used (‘firmly charge and command’) suggest that there could be some reluctance to take up the estate of serjeant.  In a writ of 1382 the fine had gone up to £100.

The second thing to note is that in taking up their estate they were ordered to ‘give the gold’. This meant that when they were appointed they “gave gold”, usually in the form of rings, to their peers and the aristocracy. Typically this involved about ten pounds weight of gold which, at today’s price would be about £150,000, although there is an instance of one individual giving five times that amount. That was just the raw material. Then it was made into rings and a motto engraved around it, presumably also at great costs. They also hosted, at their expense, a feast. Which could go on for up to seven days although, due to the crippling expense, in 1550 the serjeants persuaded the King to limit it to one grand dinner. Still, at on grand dinner in 1555 they consumed:

All paid for by the incoming Sergeant. However there is no evidence as to what Nicholas Gour gave in the form of gold or provided in the way of a feast when he became a sergeant at law in 1354.

Nicholas died between 1360-70 and his tomb in Pembridge Church shows him in the dress of serjaent. A project is taking place at the minute to recreate the costumes of the effigies, the progress of which can be seen below. 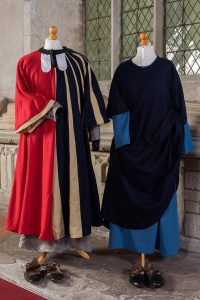