Charity has always been a part of life in Pembridge as an old wooden board in the church shows. In the back of the church, on the north wall, behind the main entrance there is an old board. Dated 1794, and created by the Rector and Churchwarden at the time, it lists all the donations and funds that had been donated to the village to support the poor. From money for sermons and bread for those attending to wood or coal, to bell ropes for the church, the board details all the land that was left to support the village.

Although the board was produced over 200 hundred years ago some of the charitable works listed still exist – the subject of an earlier blog posts the charitable status of the Alms Houses still exists today. The board shows that even then, Bishop Duppa was getting credit for building the alms houses, even though they were built earlier than his endowment.

Full details of the information on the board is below.

TO THE PARISH OF PEMBRIDGE

BISHOP DUPPA, built the UPPER ALM’S HOUSE and endowed it with the Rent of certain Lands in BROXWOOD called the COLLIERS

Dr TRAFFORD and ALICE his Widow built the LOWER ALM’S HOUSE and endowed it with a Messuage and Lands in the Parish of Lionshall purchased by the said Dr Trafford, of one Barnaby Traunter and now in the occupation of John Carwardine – and with a Rentcharge of five Pounds ann. From a House and Premises in KINGTON, late in possession of Antony Arundel – and also with a yearly chart of ten Shillings payable from a parcel of Land called the WELLBURIES in this Parish.

Mrs ALICE TRAFFORD gave the yearly sum of one pound and five shillings, payable from the said parcel of Land called WELLBURIES, to be disposed of by the Rector and Churchwardens in bread on good Friday.

Mrs DAVENANT METCALFE gave the rent of a parcel of Land called KINGS-CLOSE, in this Parish and five shillings yearly payable from the said Land called WELLBUREIS, to be disposed of as above in bread on Christmas Eve.

WILLIAM CARPENTER Esq gave his Lands and Tenements situate in the Borough and in the Parish of Weobley part whereof is now rented by the Marquis of Bath, other part thereof is Lett on Lease to John Peplos Birch Esq, and the remainder thereof to Mr John Insole for the following Purposes Viz.

To each of the Churchwardens present at each Sermon 1 shilling

To the Clerk present at each Sermon 1 shilling

To such of the Poor of the Town of Pembridge as shall be present at each, to be disposed of in Bread on each of the above days £2 10s

And the Surplis of the Rents and profits of the said Lands and Tenements, to be disposed of Annually, at the discretion of the Rector and Churchwardens for the time being.

Mr RICHARD GOODMAN gave five Pounds yearly Payable from the YEW-TREE Estate in Marston, to be disposed of in Wood, or Coal on the 1st day of May.

Mr JOHN STEAD gave six Pounds yearly to six poor Bachelors, or Widowers, to be nominated by the Rector and Churchwardens, on Easter-Monday payable from an Estate at AYLEY, in the Parish of Kinersley, now in the possession of Thomas Clutton Esq.

A Piece of Land near the Bridge called BELL-CLOSE, now in possession of John Wilding is charged with providing Ropes for the Bells whenever they are wanted. 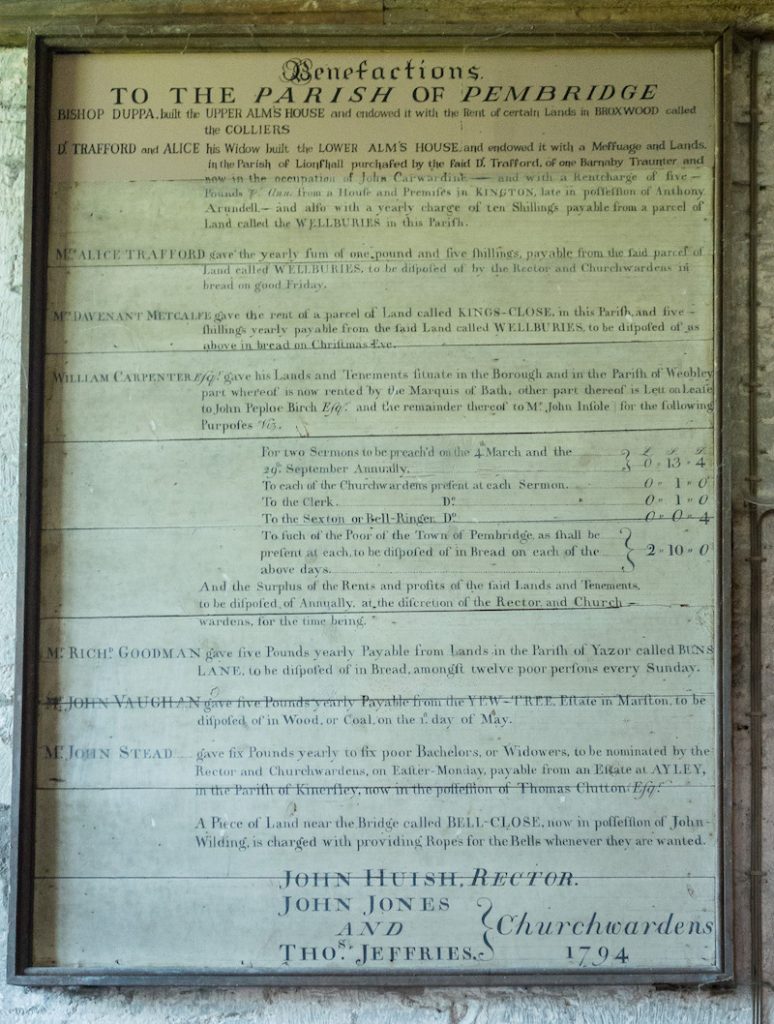