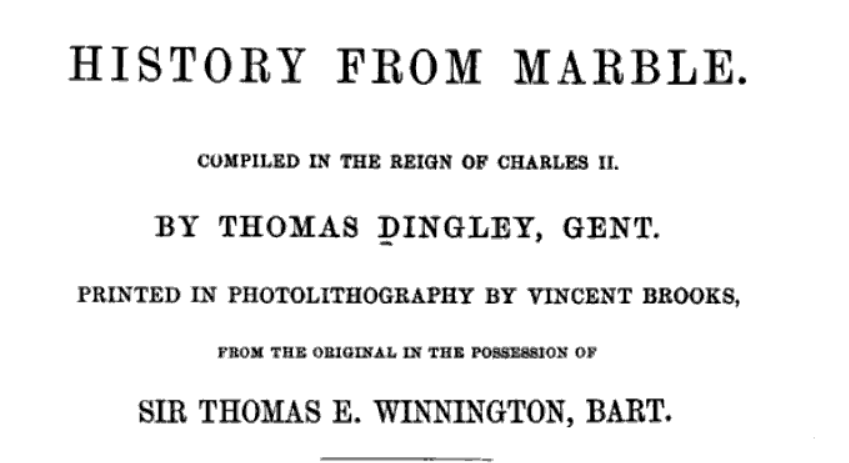 Pembridge Church has been an attraction for visitors, and luckily for us some of these people who have visited the church over the last few hundred years have left notes and descriptions over what they have seen which enables us to learn more about how the church has changed throughout its history. 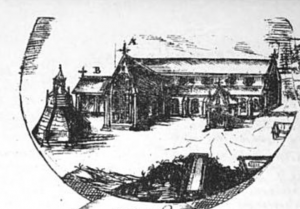 One such visitor was Thomas Dingley, an English antiquary who died in 1695. For part of his life he lived in Dilwyn, Herefordshire and made notes on various churches he visited throughout his lifetime. These notes were printed in 1867, by the Camden Society under the title “History from Marble compiled in the reign of Charles II by Thomas Dingley, Gent.” The Camden Society was founded in 1838, in London, to publish early historical and literary materials, both unpublished manuscripts and new editions of rare printed books. Some of the books that they have published have now been digitised and are now available online, which means that we can see what might be some of the earliest drawings of the Pembridge Church that have survived.

We know that Thomas Dingly visited Pembridge Church after 1679, as he described the epitaph of William Sherbourne, Rector of Pembridge who died in 1679. He drew the church from both the North and the South as well as the tombs of the Gours. He also made some brief notes about the church and village which are reproduced in the History from Marble.

“In the town is an almshouse for 6 poor with the Alms and Inscription following in ill Capital Roman Letters and as bad spelling endowed with 12p per annum for ever.
….
Forget not your good Benefactor Brion Duppa as Reverend Father and late Lord Bishop of Winchester at whose charge this house was redefined with relief go 6 poor people a … precedent of pious charity but now possesses of Heavenly.
In the Sarnsfield Chancel besides those of Mornington are these in glass following vis 1st of Hopwood of Milton, 3 cocks gules 2. a lion rampart, 3 Grandison.”

What is interesting about this is it shows how the inscription on the Duppa Alms houses has changed over the years. The Sarnsfield Chancel has also changed over the years – this is likely to have been where the Flower vestry is now and the coats of arms described in the stained glass have disappeared.

The Gour Tombs in Pembridge Church drawn by Thomas Dingley