Pembridge has two sets of almshouses; the Duppa Alms Houses and the Trafford Alms houses. Both are named after their founders who donated the funds for them to be established.

Alms houses are charitable housing, which is usually provided to allow people, particularly elderly people to remain living in a community. They’ve been around since the 10th century and the oldest one in existence is the Hospital of St Cross in Winchester which dates to about 1132. The almshouses in Pembridge are a lot more recent.

The Trafford Almshouses are at the east end of the village.

We know that the Trafford Almshouses were founded by Thomas Trafford and  endowed in 1686 by Alice Trafford according to the sign on them;

This Hospital founded by Thomas Trafford Dr in Divinity & Rector of this Parish was finished and endowed according to his design and direction by Alice his Relict. AD 1686.

Relict is an old term for a widow.

A deed, dated February 1686, shows that Alice, widow of Thomas Trafford, late Rector of Pembridge, gave a rent-charge issuing from a house in Kington, to support six poor people in Dr. Trafford’s almshouse in Pembridge. 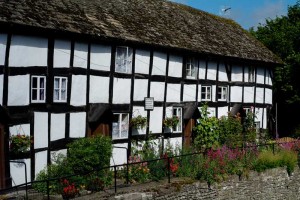 These can be found in the centre of the village, at the top of Bridge Street. The Duppa Almshouses are the older of the two sets of almshouses. Originally this was six two storey dwellings, although this has now been converted to four houses, shown in the photo at the top of this page. These are a lot more irregularly spaced than the Trafford Almshouses, but like them, they have a sign on the front which gives a date of founding and details of the purported founder,

Forget not your good benefactor Brian Duppa, Bishop of Winchester who bielded this hospital 1661

Although this suggests a date of 1661 for the building of them dendrochronology or tree ring dating of some of the beams suggests that there was an earlier building here prior to the founding of the Almshouses. The north half of the building, nos. 3 and 4 Duppa Cottages, was sampled as part of a dendro dating study and gave a tree-ring date range of 1486 to 1502, which suggests that these almshouses were actually making use of earlier buildings. This could explain the irregularity in the layout of this building.

The inscription on the front certainly contains an element of poetic license – Bishop Duppa certainly contributed funds for the establishment of these almshouses, but the building work was done at an earlier point and he was not the founder, although that is a topic for another day.

The charitable status of the almshouses is still remains today.